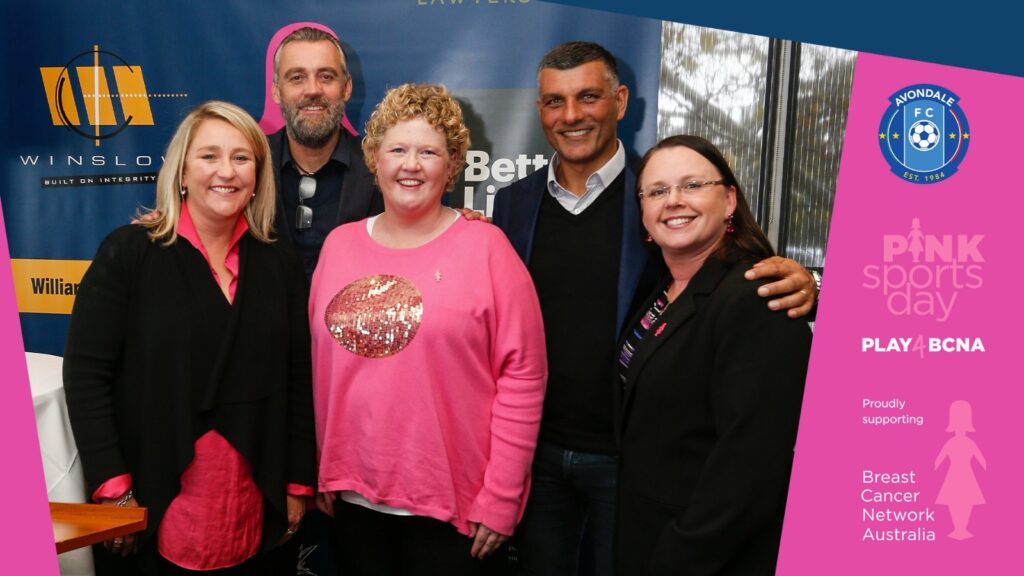 BCNA is Australia’s leading breast cancer consumer organisation, working tirelessly to ensure that all Australians who are affected by breast cancer receive the very best care, treatment and support.

The event was a resounding success, with over $35,000 raised for BCNA. Hundreds of people attended the day, including VIP guests former Socceroo John Aloisi and commentator Simon Hill.

The special event began with a clinic for the club’s junior girls players, hosted by Avondale’s senior women’s team, with over 35 junior players and their parents attending. The early start to the morning was made all the more easier thanks to free coffee and finger buns provided by Red Energy and Bakers Delight. After the clinic, Socceroos legend John Aloisi signed autographs and posed for photos with all the players and presented them with a special pink commemorative hat and jersey.

Following the junior girls clinic, Avondale’s senior women’s team hosted a special exhibition match against Spring Hills. Prior to kick off the players received some extra motivation with John Aloisi giving an exceptional pre-game speech in the locker rooms. To mark the occasion Avondale wore a special all-pink playing kit to fully embrace the spirit of the Pink Sports Day. With the sun shining and a large crowd watching on, Avondale put on a great performance, defeating Spring Hills 5-1.

The day’s final event was a top-of-the-table clash between Avondale’s senior men’s team and South Melbourne FC. Like the senior women, the men’s side wore a special all-pink kit featuring the Pink Sports Day and BCNA logos. With top spot on the NPL Victoria ladder on the line, Avondale put on brilliant performance to claim a 2-0 victory and move into outright first place.

With tens of thousands of dollars raised and hundreds of fans in attendance, Avondale FC and BCNA’s Pink Sports Day was a tremendous success. Everyone in attendance fully embraced the spirit of the day, making donations and purchAsing special BCNA merchandise to create a sea of pink around the stadium.

Avondale FC is immensely proud to have partnered with such a worthy and incredible charity in BCNA. The $35,000 raised will help provide support for the more than 20,000 Australians who are diagnosed with breast cancer this year.

The day would not have been possible without the incredible support and sponsorship from HWL Ebsworth Lawyers, William Adams Cat, Better Living Group, Red Energy, Mont Albert Interiors, Winslow Constructors and MFJ Constructions.

WATCH: Check out the all the action from our amazing BCNA Pink Sports Day, including match highlights, the junior girls clinic, the charity lunch and interviews with our special guests!