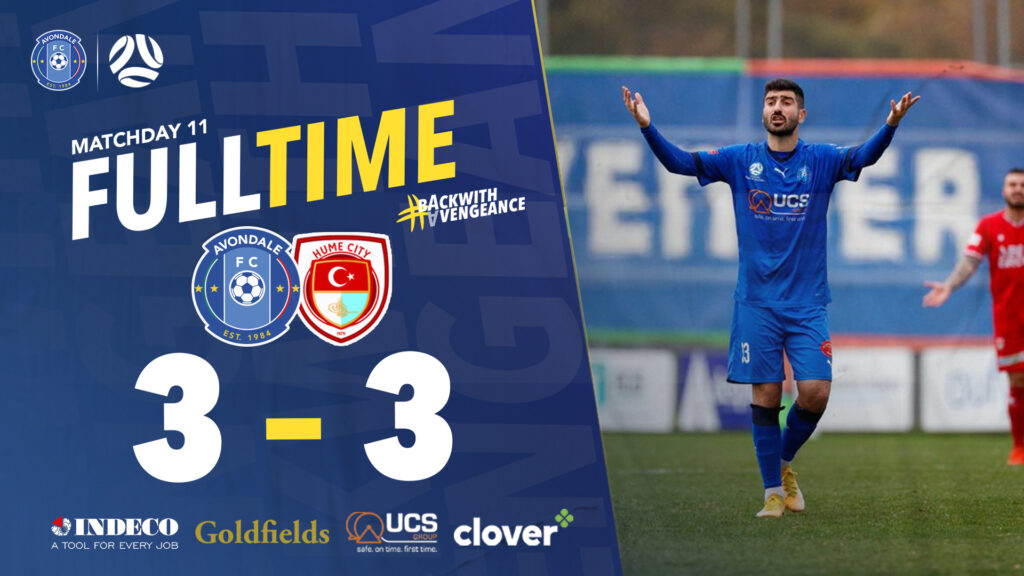 Avondale FC have moved into top spot on the NPL Victoria table after salvaging a dramatic 3-3 draw against Hume City at Avenger Park on Saturday.Trailing by two heading into stoppage time, goals from Stefan Zinni and Brandon Lundy rescued a vital point for the Avengers that sees them move above South Melbourne and into first spot.

Earlier, Hume took the lead just four minutes into the game when Andy Brennan poked home a cross. Their lead didn’t last long however, with Stefan Valentini bringing Avondale level three minutes later with a header from a corner.

Hume retook the lead just before half time when Josh Bingham converted from the penalty spot. The visitors doubled their advantage early in the second half after Phillip Riccobene’s attempted clearance unfortunately found the back of his own net.
Unlucky to find themselves behind, Avondale pushed hard to get themselves back into the game but struggled to break down a resilient Hume City defence. But with only minutes left in the game, the Avengers finally found a way through.

Goalkeeper Rory Brian played a huge long ball that bounced over the top of Hume’s defence, allowing Zinni to run in behind and collect it before deftly dinking his shot perfectly over the keeper to reduce Avondale‘s deficit to one.

Minutes later a near identical long ball from Brian again allowed Zinni to get in behind Hume’s defence. This time his shot was saved, however Lundy was in the perfect position to slot the rebound home past the hapless keeper.

The result sees Avondale extend their unbeaten run to 10 games in all competitions ahead of a huge run of games against fellow top-six opponents.

The Avengers will take on second-placed South this weekend as part of the club‘s special Breast Cancer Network Australia charity day, followed by games against third-placed Heidelberg and sixth-placed Oakleigh in the following weeks.