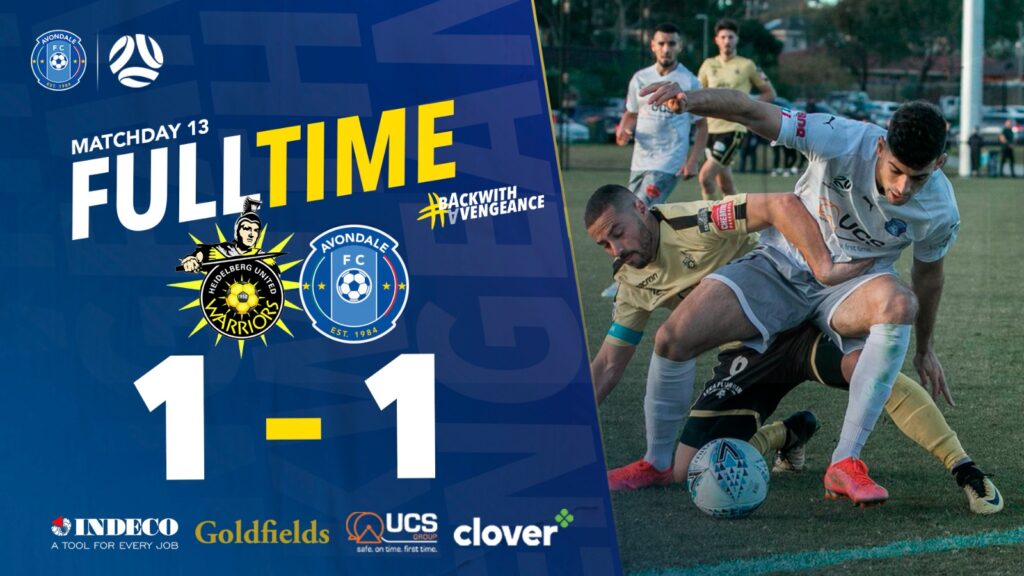 Our senior men’s team have maintained their lead on top of the table after a hard-fought 1-1 draw with Heidelberg United at Olympic Village on Sunday.Stefan Zinni gave Avondale the lead late in the first half with his second goal of the season, but a calamity at the back gifted Heidelberg the equaliser in the 67th minute.

With a chance to extend their gap in first place, it was Avondale who had the better of a hard-fought first half. Scott Hilliar came close to giving the Avengers the lead, only for his well-hit strike to be saved.

Minutes later though a great pass from Mario Barcia put Dillon Jakupi in behind the Berger’s defence, with Jakupi squaring the ball for an on-running Zinni to blast into the back of the net.
Early in the second half Kristian Trajceski and Yitay Towns both had great chances to add to Avondale‘s advantage, but both shots were straight at the Heidelberg goalkeeper.

After failing to capitalise on their dominance, Avondale were made to pay at the other end of the pitch. A costly turnover at the back allowed Heidelberg’s Adrian Zahra to pinch the ball and pass it into an empty net to bring the Bergers level.

The goal gave Heidelberg all the momentum and the home side looked the more likely side to push on and claim a winner, but Avondale‘s defence held firm to ensure the points were shared.

The draw sees Avondale extend their unbeaten run to 12 consecutive games in all competitions. It also keeps the Avengers in top spot on the table at the mid-way point of the NPL season, two points ahead of second-placed Bentleigh and three points ahead of South Melbourne and Heidelberg in third and fourth.