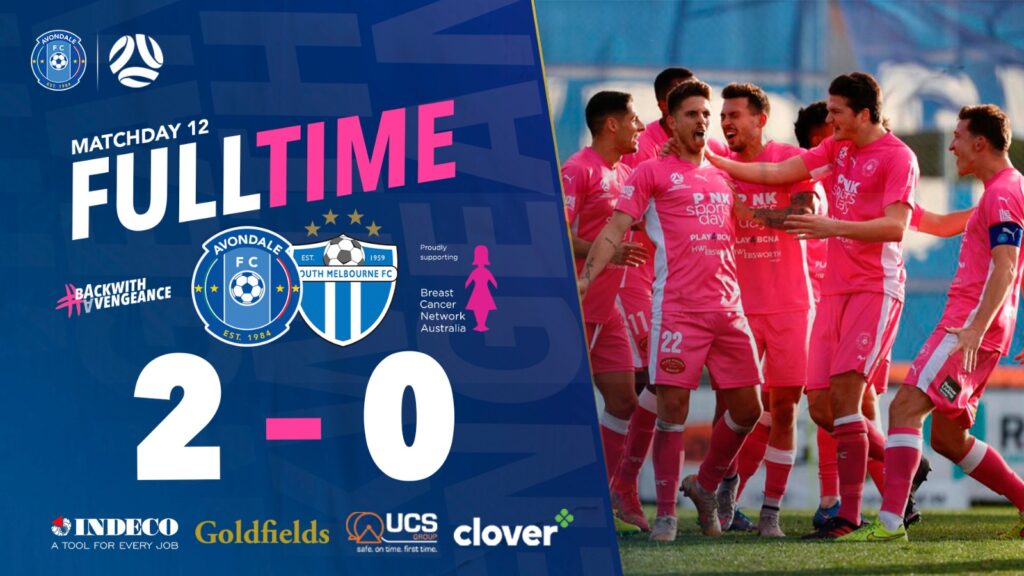 Our senior men’s team have moved two points clear on top of the table thanks to a 2-0 win over South Melbourne in a top-of-the-table clash at Avenger Park on Saturday.With a bumper crowd in attendance to help celebrate our special charity day in partnership with Breast Cancer Network Australia, second-half goals from Stefan Valentini and Yusuf Ahmed clinched the win to cap off a special day.

With top spot on the line, it was the visitors South Melbourne who had the best chance in the first half. A neat cross found Marcus Schroen inside the six-yard box, but goalkeeper Rory Brian kept the ball out with a spectacular sprawling save.

Ahmed and Kristian Trajceski had chances down the other end, but both
were denied by South’s keeper as the two sides went into half time deadlocked at 0-0.

It didn’t take long for the game’s first goal after the break, however. Stefan Zinni made a run into the box and was brought down by a South defender, with the referee pointing to the spot. Valentini stepped up and sent the keeper the wrong way to give us the lead in the 56th minute.

Just six minutes later though it the visitors who were awarded a spot kick of their own. With the chance to bring South level, Gerrie Sylaidos blasted his shot on target but he was denied by an incredible save from Brian, his big left hand clawing the ball away from the top corner.

The massive save swung all the momentum Avondale‘s way and soon after Ahmed capitalised. Valentini made a great run into the box and his initial shot thundered into the crossbar, but Ahdmed was there to calmly head the rebound home.

Yitay Towns had a late chance to add our third goal of the afternoon but just narrowly missed out after his right-foot strike also smacked into the crossbar.

The two goals however were still more than enough for us to seal the win. The result sees us open up a gap at the top of the table, giving us a two-point advantage over Bentleigh in second, and a three-point gap over South and Heidelberg in third and fourth.

We will face another huge test in our next match this weekend ass we take on Heidelberg at 3pm this Sunday at Olympic Village.