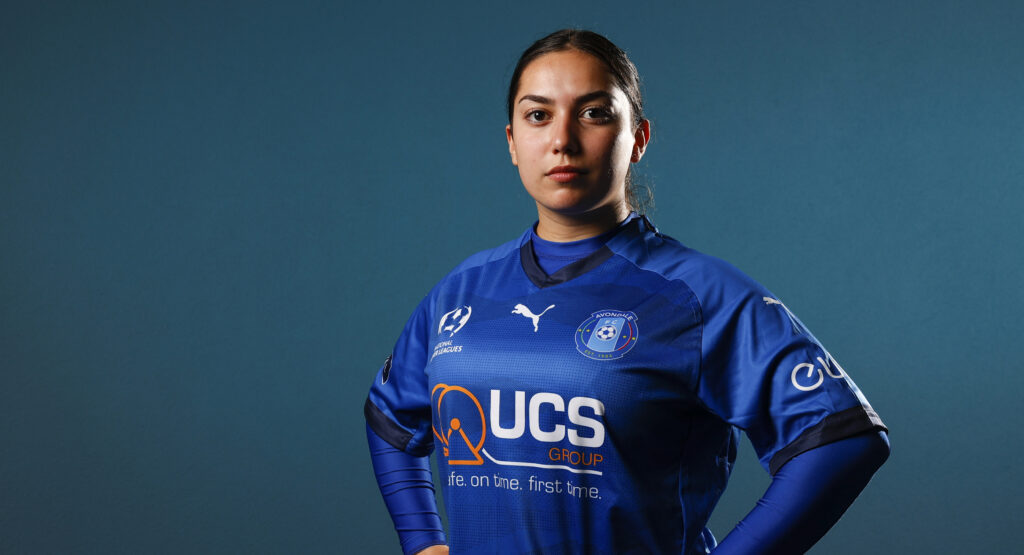 Senior women’s centre-back Sarah Lia describes herself as a “committed player”, and denotes her ability to anticipate the play as her best footballing attribute.

Lia reflects her ability to foresee the play and importantly read her teammates are significant skills to her individual game.

Her interest in the sport started early, ignited following the passing of her football-loving uncle, and by the age of eight she had begun developing deeper understandings of the game.

Around the same time, Lia spent her school holidays attending Juventus soccer camps to develop and improve her football skills.

It would be while watching Juventus compete against the Australian All-Star team in 2014 that further fuelled Lia’s passion for the game.

In 2019, at age 16, Lia trialed at Avondale FC where she was successfully selected to join the senior women’s team.

Lia credits the welcoming nature displayed by her older teammates when she joined Avondale FC as to influencing her personal approach to support new squad members.

“I try to be a leader on and off the field … Make others feel [how I felt] when I first joined,” she said.

Notably, leadership doesn’t stray from Lia. At the age of 14, she captained the Under 18s team in the 2017 Singapore Cup.

Lia further mentions playing for the Australian Foot Skills team in the Under 18s Singapore Cup, both in 2016 and 2017, as some of her greatest achievements.

Particularly, while playing in the Singapore Cup, competing against several South Pacific teams, including Thailand and Phillipines, the team achieved third place in both years.

While overseas, Lia also participated in a mini tournament in Malaysia.

Lia adopts the mentality that “everything happens for a reason”, applying this philosophy within several aspects of her life on and off the field.

The Mind of Sarah Lia

“No matter what soccer guernsey I have, they all have Neymar, even if he didn’t play for that team.”

However, Sarah realised this year she constantly played with a white hair tie around her wrist. Coincidentally, the time Sarah did not wear the hair tie on her wrist but ironically in her hair, the team lost the game. Since then, she has thrown away the hair tie.

If you could make anything into any Olympic sport, what would it be?

Make egg and spoon race an Olympic Sport, however, Lia highlights she would not win.

Lia is currently studying a degree in radiation therapy as well as hoping to start an eyebrow lamination small business.

She also works as a dental nurse and enjoys working with her dad as an electrical inspector. Jokingly, she said “I always say that I want to become a sparky.”