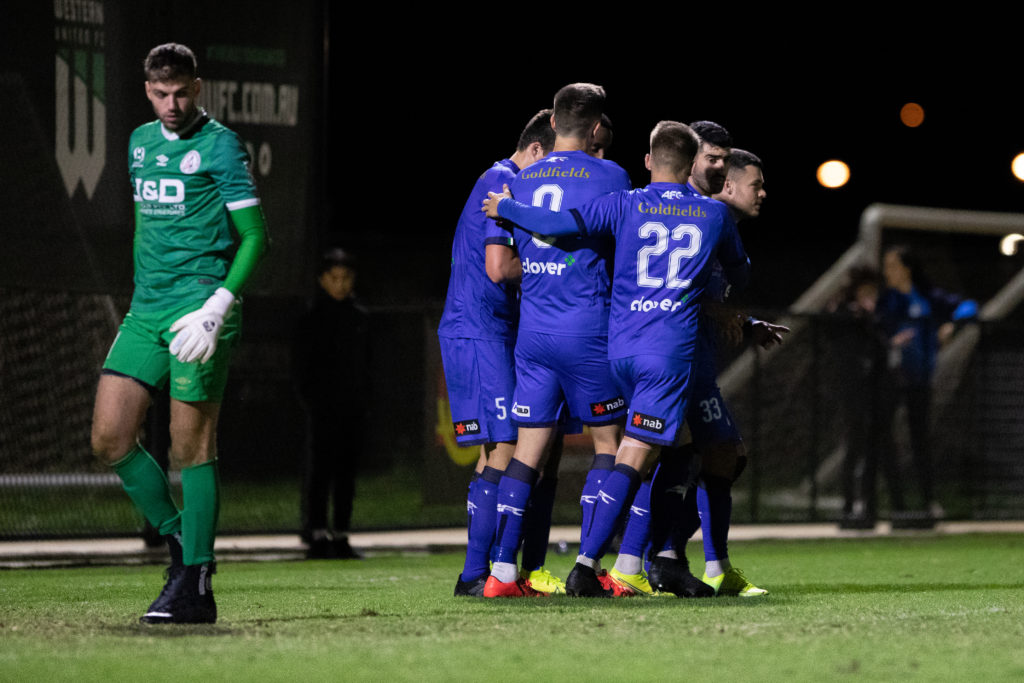 Avondale have claimed their fourth win in a row after a dominant 6-1 thumping of the Melbourne Knights on Saturday night at City Vista Reserve.

A stunning first half-blitz saw Avondale score three goals in four minutes and all but blow the Knights out of the water.

A goal for the Knights did little to slow the Avondale onslaught, with the Avengers pilling on another three goals to run out comfortable winners.

There was plenty on the line heading into this one, with both teams having played a number of fiery clashes last season. But it was Avondale who settled best and looked the better of the two sides early on, and it didn’t take long for them to take the lead.

Yusuf Ahmed opened the scoring for the home side after some lovely build up play and a neat pass from Stefan Valentini put him through one-on-one, with the big striker making no mistake to tuck home his second goal in as many weeks.

After providing the assist Valentini then turned goalscorer himself, netting Avondale’s second less than two minutes later. A great pass from Ahmed found him in space and a beautiful first-touch flick and powerful run put him through on goal to double his side’s lead.

Less than four minutes after the first goal, Stefan Zinni capped off the early onslaught. A great through ball from Tasuku Sekiya put him in behind the Knights’ defence, with Zinni easily shooting past the keeper to make it 3-0.

Despite being rattled after conceding three goals in four minutes, the Knights went on to enjoy their best period of the game.

Striker Hamish Watson came close to pulling a goal back almost immediately, but his shot was blocked by a lunging Matthew Reid. Watson came even closer to scoring minutes later, but this time his headed effort was spectacularly clawed off the line by a diving Chris Oldfield.

But after being denied twice, Watson eventually found his goal. A long ball got in behind the Avondale back line, with Watson winning the race to get on the end of it before neatly lifting the ball over an onrushing Oldfield to peg one back for the Knights.

The goal did little to swing momentum the Knights’ way, with Avondale quickly re-establishing their control of the game and the goal scoring chances continuing to flow.

An acrobatic effort from Sekiya flew just over the bar, while Ahmed had a spectacular volley ruled out for offside and Liam Boland – who came on as a first-half sub to replace an injured Zinni – saw his shot crash into the crossbar.

Any faint hopes of a comeback the Knights may still have had were then crushed just before half time after Valentini netted his brace with a thundering header to make it 4-1.

After the break, Avondale’s dominance continued. Sekiya, Boland and Valentini all had chances on goal, but couldn’t extend their side’s advantage.

Eventually though, Avondale did extend their lead. A well-worked corner routine put Reid in space, with the big defender heading home to make it five.

Jonatan Germano then capped the night off with a sixth goal, rising well to meet a lovely cross from Yitay Towns and head it past the helpless Knights keeper.

The tidal wave of goals now means the Avengers boast the title of most potent attacking team in the league, with 14 goals scored so far this season. The win also sees Avondale climb up to fourth on the table, while the Knights remain winless and sit in 11th.

Avondale will take on the Bentleigh Greens in a grand final rematch this Friday night at 8:15pm at Kingston Heath Soccer Complex.