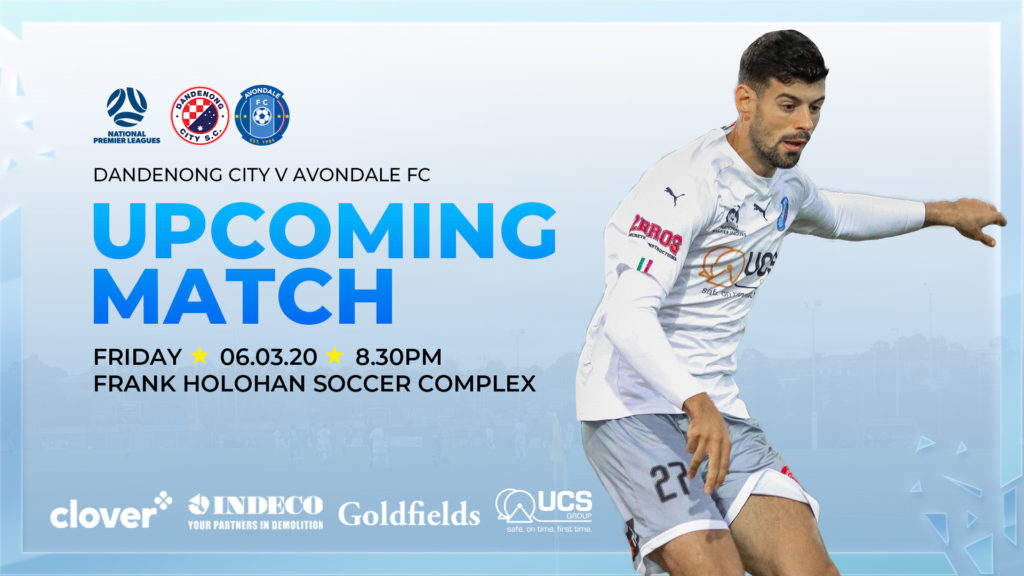 Avondale will be out to claim their third win in a row when they travel to take on a winless Dandenong City this Friday night at Frank Holohan Reserve.

The Avengers will enter the game on the back of two impressive performances – a dominant 2-0 win over Green Gully last Friday night and a comfortable 2-0 victory over Altona Magic in round two.

After conceding three goals in the opening round against Oakleigh the Avenger defence has been air-tight, keeping consecutive clean sheets and allowing only four shots on target in the last two games combined.

The addition of Blake Carpenter to the squad in 2020 and the return of Matthew Reid to the starting lineup after a pre-season injury have bolstered the backline, while Scott Hilliar and Yitay Towns have also started off the season strongly.

At the other end of the pitch, Stefan Valentini has been in fine form after scoring in each of the last two matches, while Joey Katebian has also been impressive despite not yet finding the back of the net.

Avondale’s attack could be further bolstered on Friday night by the potential returns of Liam Boland and Stefan Zinni to the starting lineup. Both players appeared in the Green Gully game as second-half substitutes, but could be feature from the get go against Dandy City as they return from injury and suspension, respectively.

While the Avengers will enter their round four match up on the back of some good form, the same cannot be said for their opponents.

Dandy City are yet to register a win in season 2020, having lost to Hume City and Dandenong Thunder and drawing with St Albans.

Despite their poor start to the season, City feature plenty of star power. The team is coached by former Socceroo Sasa Ognenovski and features former A-League players Adrian Leijer and Nick Kalmar.