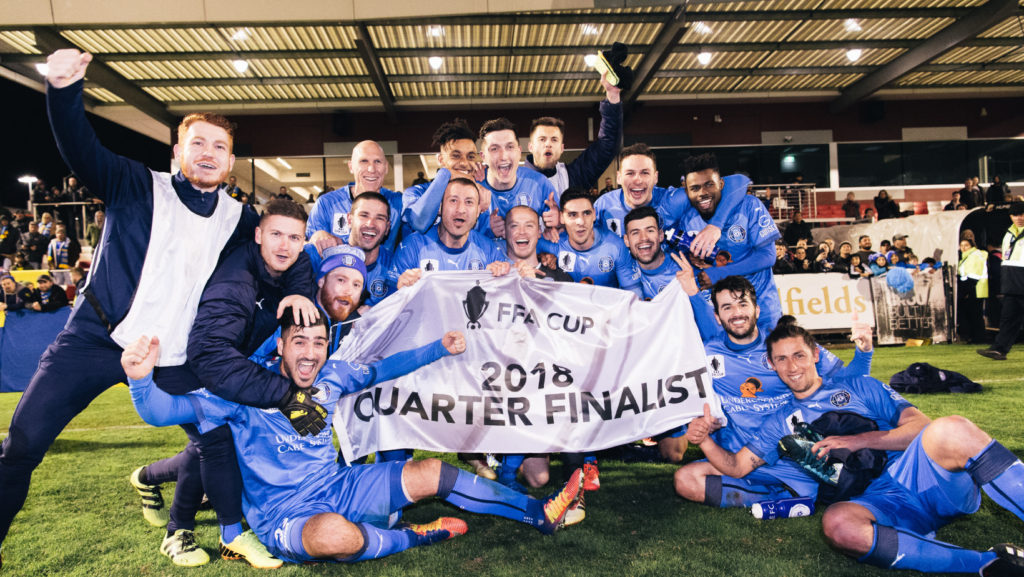 It was another chance for Avondale FC to create even more history in Season 2018 as they took on Tasmanian NPL outfit Devonport Strikers FC in the FFA Cup Round of 16.

Devonport Strikers FC sits at the top of NPL Tasmania and gained victory over fellow NPL Victorian’s Northcote City FC in the FFA Cup Round of 32 to reach the Round of 16.

Understanding their quality, it was going to be a momentous occasion if either side were able to gain victory and move on to the Quarterfinals of the competition.

With club captain Phil Riccobene being rested, it was otherwise a strong side to choose from with a number of players starting to shake their mid-season injuries, and a fantastic sign leading into this time of year.

Ross Archibald took the captain’s armband for the match as he has done a number of times already this past season growing his maturity, both on and off the field into a leadership role for the club.

It was an interesting start to the game, as Devonport Strikers FC showed clear intentions that they were going to sit back deep and defend, allowing Avondale FC to control and dominate possession.

With this type of game plan, it was their hope to catch Avondale FC on the counter, but anytime Devonport Strikers FC was able to regain possession the quality going forward would always break down.

As Avondale FC continued to dominate with the ball, Elvis Kamsoba showed his individual quality and was able to unlock the Devonport Strikers FC defence down their right side on numerous occasions, and on the 20th minute that again was evident which allowed Kamsoba to find Kaine Sheppard in the box for the first goal of the game and a 1:0 lead.

Pressure continued to build on the Tasmanian defence and so did the corner count for Avondale FC. A brilliant corner into the box by Joey Katebian found the head of captain Ross Archibald and he was able to double the lead to 2:0, with the keeper having no chance at close range.

The 40th minute brought shrouds of confusion as a ball from Devonport Strikers FC into their box saw striker Liam Boland on defensive duties go down, but a penalty to the away team was awarded. With the penalty kick converted, Devonport Strikers FC kept their chances alive going into the breakdown 2:1.

The second half saw a shift in tactics from the Tasmanian side as they looked to press higher up the pitch and try and make the Avondale FC defence play the ball long.

The quality of the ball playing defenders at Avondale FC was rarely troubled by the higher press and continued to move the ball and keep possession similar to the first half.

With the Avondale FC keeper, Chris Oldfield rarely tested from open play, the game would be put beyond doubt when Kamsoba in the 82nd minute put the Devonport Strikers FC defence on skates, finishing past the keeper and wheeling away with his famous tumbling celebration.

In the last minute of the game, Boland this time was brought down in his own box and won his team a penalty. Club Vice-Captain Jonatan Germano, who has had his battle with injuries this season was able to put the icing on the cake with a calmly converted penalty and claim a 4:1 victory and another milestone for the club.

The club now progresses to the last eight clubs in Australia in the quarterfinals of the FFA Cup, with the draw being decided on Tuesday 28th August. The club has gained a number of history-making moments throughout this season and can continue into the next round of the competition.