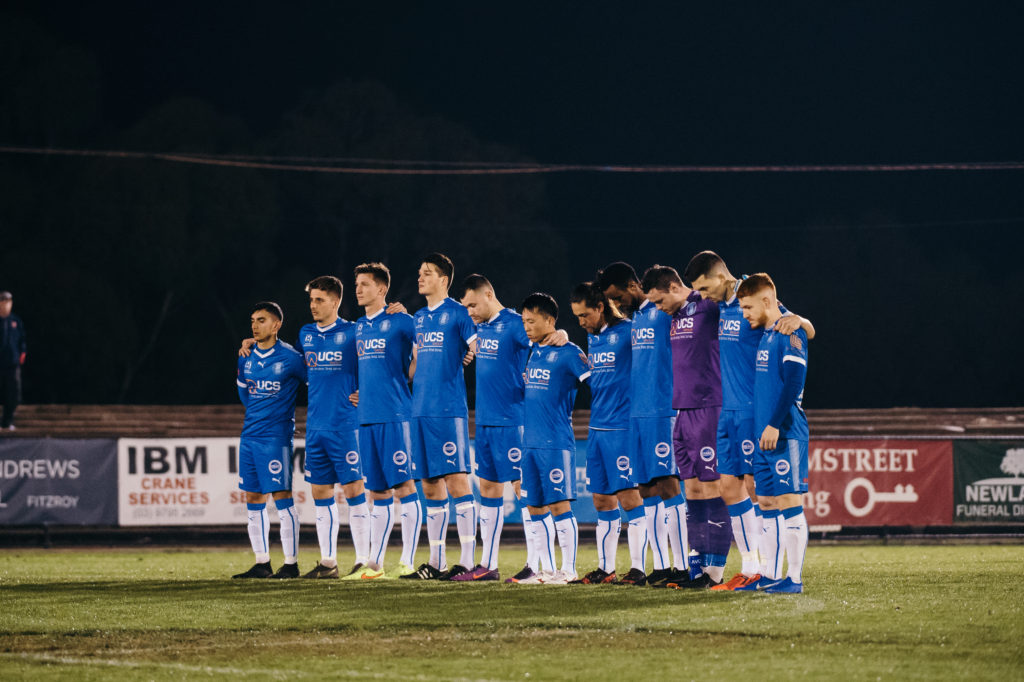 Avondale have suffered a heartbreaking defeat at the hands of the Oakleigh Cannons, conceding a late goal to lose 4-3 at Jack Edwards Reserve on Saturday night.

The Avengers looked like they’d done enough to snatch a draw after two goals in five minutes brought them level late, only for Oakleigh to score again in stoppage time to claim all three points.

The match loomed as a huge clash with both sides having plenty to play for. The Cannons came into the match in league-best form being undefeated in their last 11 games, while Avondale knew they would need to earn at least a point to keep their top spot safe.

With plenty on the line the game got off to a horror start for Avondale who conceded a goal just 90 seconds into the game. A curling through ball put Oakleigh’s Harry White through on goal and although keeper Chris Oldfield saved the initial shot, White was able to tap the rebound home.

The goal put the Avengers on the back foot but seemed to serve as a wake-up call, the visitors soon worked their way into the game and brought themselves level only 10 minutes later.

All the highlights from out matchday 23 clash with Oakleigh.

Jem Berkant went on a storming run down the left-hand side before delivering a lovely low cross to Liam Boland who laid the ball off perfectly for Stefan Zinni who struck the ball home into the bottom corner.

After playing an instrumental role in setting up Avondale’s first goal Berkant was later forced from the pitch when he suffered a serious-looking knee injury in a seemingly innocuous challenge. The midfielder was taken from the field on a stretcher, with no news yet on the severity of the injury.

Jonatan Germano was brought on to replace Berkant and the Argentine-international came close to putting his side in the lead just before the break but his headed effort was wide of the target.

A goal would have given Avondale a massive boost right before the half-time break but instead the visitors were left reeling when they conceded a second deep into stoppage time.

Oakleigh striker Joe Guest’s shot looked to be going wide but took a huge deflection of Stefan Valentini, completely wrongfooting a helpless Oldfield who could do nothing but watch the ball bounce into the back of the net.

The late goal gave the Cannons all the momentum and the home side carried it on into the second half, striking again shortly after the break as White netted his second goal of the night and Oakleigh’s third for the match.

The Cannons then controlled most of the second half as Avondale failed to look overly threatening and struggled to create quality chances, and as the game neared its conclusion the Avengers found themselves lucky to still be in the contest after two Oakleigh shots cannoned into the post and crossbar.

Despite looking out of the contest for most of the second half Avondale found a burst of life with 10 minutes to play.

Yusuf Ahmed scored one of the goals of the season to halve the deficit. After galloping through midfield he unleashed an absolute peach of a strike from long range that dipped and swerved as it screamed into the top corner, with Oakleigh keeper John Honos left rooted to the spot as he watched the ball sail past him.

Ahmed’s goal provided the spark his side desperately needed, handing Avondale all the momentum as they pushed desperately for an equaliser, and soon, just five minutes later, they had it.

Laim Boland brought the Avengers level after he twisted and turned with the ball at his feet before cutting back and tucking his shot past Honos.

Boland’s late goal looked like it would be enough for the Azzurri to salvage a draw and snatch a crucial point, but Avondale’s excitement soon turned to sorrow after Oakleigh netted a goal deep in stoppage time.

The post-match interviews after our matchday 23 clash with Oakleigh.

Oakleigh’s Guest was left unmarked as he streamed into the box to head home a cross in the 92nd minute to send the home fans into delirium and break Avondale hearts.

The result has dire consequences for the Avengers and could see them fall from the top spot on the table for the first time this season.

Second-placed Heidelberg now only sit two points behind Avondale, but the ‘Bergers still hold a game in hand, meaning a win would see them jump into first place. Heidelberg will face Oakleigh on August 9 in their catch-up game.

The Avengers will be desperate for a win this weekend when they take on the Altona Magic at 6:00pm on Saturday at Paisley Park as they look to try to hang on to their status as NPL leaders.